The square of free books

“La plaza de los libros libres” next to the “Arbol de la sabiduría”, consists of a popular library in a square in a neighborhood of Malaga where people are free to take books, return them and bring more books. In addition, there are also several notebooks for people to express and share what they feel through writing or drawing, or any free and creative way of expressing themselves.

Also, once a month there are markers and a big roll of paper that is thrown on the floor for people to express themselves, with the idea that one day a book can be made with all these expressions.

It is a space of multicultural knowledge through the solidarity of the neighborhood, where over time foreign people have also joined in.

Books are within everyone’s reach!

“La plaza de los libros libres” located in the San Pedro de Alcántara square in the center of Malaga Capital is a space of multicultural knowledge that has been created thanks to the solidarity of the people, where over time residents and foreigners have been leaving books, magazines, children’s stories, music CDs, or even clothes.

It is a space created to increase and expand knowledge, that is why it is open to the public without restrictions or schedules, the important thing is to change minds for the benefit of society, because the more knowledge you can have the more you can share.

That is why “La plaza de los libros libres” has become so popular, because everyone feels free to learn at their own pace and style, without pressure to return or buy.

It is important to emphasize that its creators offer the books to everyone, especially to children playing in the square so that they can see how important and easy it is to read a book, of course, always encouraging them to be curious and that each person discovers a new world.

Have a space to learn

It is not obligatory to return the book, although it is true that if everyone takes a book and no one contributes, the library would run out, but fortunately there are people who continually bring books.

They have no database of books, the books are placed as they are received, whether they are picked up at a specific house, in an association or volunteers want to bring them.

The initiative arises basically from two people, but the contribution of books is done by people on a voluntary basis and there are people who contribute almost every day, it is born spontaneously from solidarity, even foreigners with the books they leave in their own languages, Japanese, Finnish, among others.

In this sense, the operation is very simple, all the books that are donated are shown to the public and they decide if they want to read them or not, in case they want to take them they can do it and there is no problem, being free there is no need to ask permission, pay or have to return it, the idea is to have books and that people can increase their knowledge.

So far this simple operation has been successful, the only extra that has been implemented is the protection of the same as being outdoors can get wet and colcoron a cover to prevent deterioration of the same.

Whoever wants to read

This initiative does not have a specific group of people, it only expects people who take the books for a moment or take them home to enjoy them and increase their knowledge, so people of all ages who want to learn and see the books as a tool for knowledge can participate.

The obstacles or fears they had were that the city council would come to take away the library because they were occupying a public space without permission, but this has not happened, in fact the city council is aware of this initiative. On the other hand, they thought that the vandalism was going to end quickly with the initiative, and although it has already happened a couple of times that they have found the library empty, it has only been a couple of times, so they think that it is more positive than negative, because even if something negative happens what has value is the positive. And the fact that there have been few acts of vandalism shows that there are many more good people than bad and that there are many more people who contribute.

Knowledge should be shared and not counted

The initiative does not keep accounts of the books or people who have helped, because the idea is not to be a library but to help people to acquire knowledge, for this reason the important thing is to be able to verify that people are interested in the idea, that they take and donate books. Moreover, they share in the square to transmit their knowledge to others or simply to leave messages of support.

The pandemic has affected us all, especially the young people who have seen their dreams pause from one moment to another and it is normal, most people like to relate, share, talk or simply not feel alone. However, the pandemic was a stop to everything, the important thing is that little by little with work we are recovering everything we had.

The important thing is to see the positive aspect, because there are plenty of negatives, so this moment has allowed us to see the capacity of the human being, and of the young people who collaborate and help the community, through their actions and knowledge, so that despite being a time of loss is a time of continuous reconstruction..

Antonio César Muñoz, a resident of Malaga and president of a neighborhood association who is the contact person for the initiative “La plaza de los libros libres”, although there are many volunteers, Antonio is always available and transmits the messages to the young people involved in the idea who are studying and working, which is why they are not available all day long..
Link: https://www.instagram.com/sweethomebattle/?hl=es 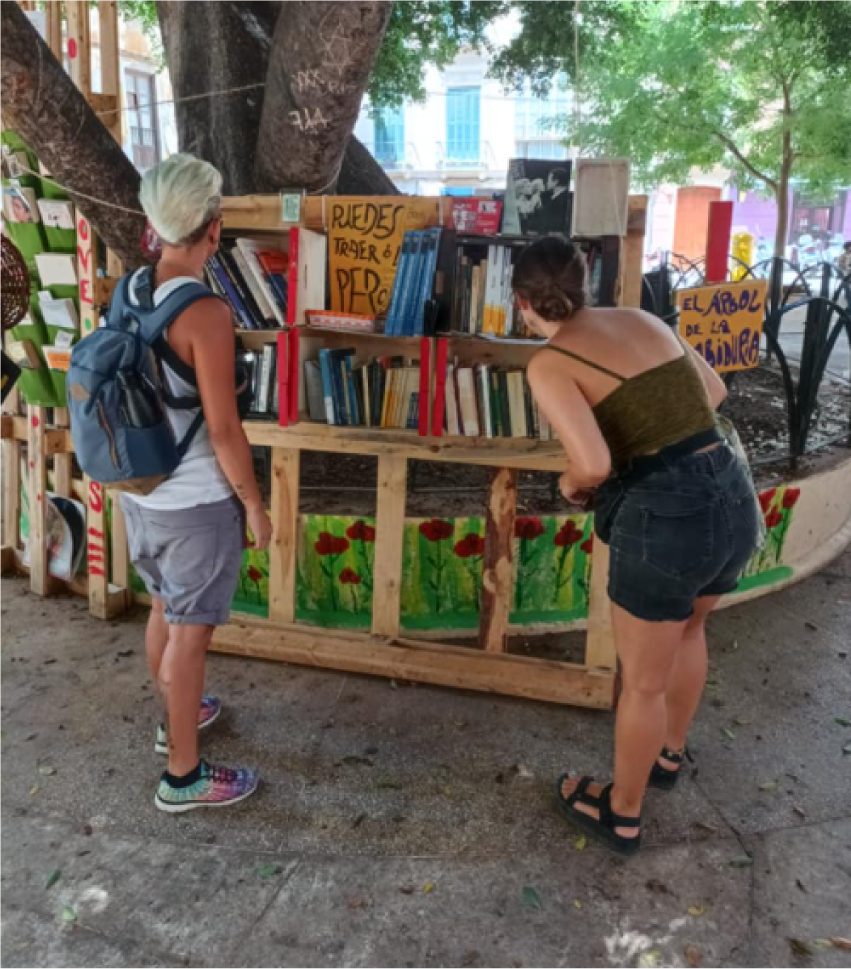