This group of young people have come together to create the Youth Philharmonic Orchestra, so they have put all their effort, knowledge and enthusiasm so that other young people can learn the importance of music.

At the time of the pandemic, they have developed activities such as virtual concerts, donation of funds for the victims of COVID-19, workshops, courses, rehearsals, among others so that young people can feel spaces of freedom and connection through a do, re, mi, fa, sol, la, si.

In addition, all its activities are carried out based on the effort of its creators, as they have dedicated themselves to make the association grow every day, which now has three times the number of participants.

This group of young people from Jerez de la Frontera decided to join together to give more children and adolescents the opportunity to learn about the world of music. To this end, they formed an association, being themselves the founders and members of the board of directors.

It is important to highlight that these young people have developed activities that have allowed them to cope with the confinement, such as virtual concerts and, once the restrictions allowed it, they performed benefit concerts for people affected by COVID-19.

The activities carried out by the group allowed people to have an escape valve, connection and help with other people through music.

They have also developed coexistence and connections that allow the youth to develop human relationships with other people of different ages, places, with different origins and customs so that they can unite through music.

In addition, they seek that the people who are part of the orchestra can do it for pleasure, since no level is required, since the idea is that people are interested in the activity, learn and can venture into the musical world.

Learning and teaching through rehearsal

This group of young people meet continuously to rehearse and improve their interpretations. Since they usually hold meetings with different themes and musical genres.

The important thing for them is that each member, approximately 70 people, can enjoy music by learning, playing and teaching others.

So the Youth Orchestra is not only about rehearsals, but also creates meetings so that all participants can meet, share other spaces and enjoy that they are young.

Because of the above, music has allowed them beyond achieving musical excellence is to have an orchestra with excellent human values, in which all its members have been able to share with different people with whom they have developed strong bonds of friendship with which they have improved, personally and professionally.

In addition, through the orchestra this group of young people have been able to create an opportunity for other young people to be in an orchestra that plays music: classical, flamenco, symphonic, among others, in which both the musicians and the public can understand, enjoy and appreciate other musical genres, because music is only one and musicians are many.

The most important thing is that everyone can enjoy music and be able to offer it to the public, especially now, because with the sanitary restrictions, art was the most affected and it is necessary to encourage the community to enjoy it again.

The group to which the initiative is addressed are young people, currently there are people from 13 to 25 years old, although the orchestra is from Jerez de la Frontera, they receive musicians from all over the province, so the group has no limitations, as long as people are interested.

These young people have counted on the collaboration of the school where they rehearse, the cathedral where they play and the community that has bought their tickets. However, they have had obstacles such as the lack of knowledge of funds to which they can participate to generate more profits and health restrictions that prevented them from continuing to develop their normal activities of rehearsals or meetings.

We are becoming more and more

This group of young people has put all their interest in the orchestra and as proof of this they have reached 70 members and several concerts in which they have sold all the tickets.

learning from the “new normal

Their experiences with COVID19, were at first a little frustrating because they had started their actions a short time ago and were suddenly stopped, although they transformed them and continued developing the activities according to the little they could do, they can highlight that it was a moment of overwhelm knowing that only the virtual media were the only possibility of contact. However, they also know that they have contributed everything they could and they are happy to see that in spite of everything that is happening, the Youth Orchestra has had a familiar and calm atmosphere in which its members have been together and have been working for the community and for each one of them in a constant way..

Meet the members of the Orchestra:

David, Pedro and Triana are the contact persons and the creators of the initiative, these young people are pursuing their university studies while developing their association 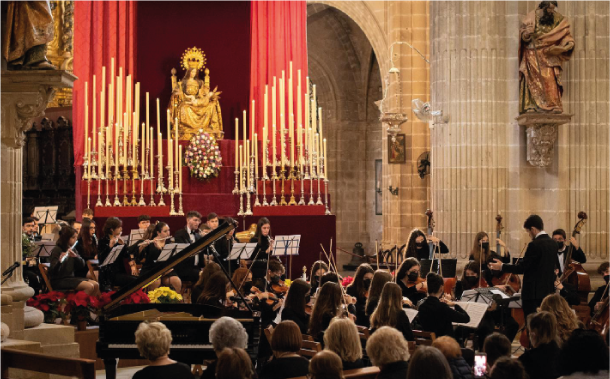