Dancing with or without restrictions

The initiative developed by Fred are dance events in which dancers participate that have been developed in virtual and face-to-face format according to the health restrictions of the moment.

In these activities Fred seeks that the people who participate can have a space that allows them to get out of their day to day, have fun and stay physically active.

Fred has developed contests, classes and workshops that focus on getting people to move and share, since each participant only has to show their willingness and have energy for physical activity.

This young man saw the consequences that confinement was having on people’s minds: the increase of bad news and the lack of socialization. therefore, he decided to create an event that would allow its participants to be busy, active and share virtually with others, so he decided to turn to dance, his passion and profession.

The reason for choosing dance was that it was a tool that allowed to transform all the sad aspects into positive ones.

Since people focused their minds on the development of choreographies, on the dance techniques, on the physical activity performed, and on sharing virtually with others, interacting with the videos uploaded by each participant, he decided to keep this type of events active.

Although in the confinement the events were virtual, now this young man continues to carry them out in a semi-presential and face-to-face way.

So now he conducts personal classes, group classes, workshops and others, which allow him to continue to maintain the space created for the community.

In this way, Fred continues to contribute to society through his art, since it is from this knowledge that this young man has developed his dance initiative.

Fred started his events with an idea that he put into action through social media, for example, in the case of the confinement event, he launched the contest through Instagram encouraging dancers to send a short video of no more than 1 minute in which they could show their dance.

So he began to receive responses from young people who uploaded videos with the #Sweethomebattle so that they could be visible to the contest and the general public.

With such a good reception from young people, its creator sought to have an international and recognized jury (Composed of 3 people among which he was included) that would allow a wider dissemination of the event, so he joined international dancers with whom through the Instagram platform made direct in which they chose the best dancers round by round.

The jury had to make difficult decisions because there was a lot of talent and enthusiasm of all the young people who uploaded their videos, so the dance and the space in which they performed the same was valued, since the amplitude or not of the space gave greater difficulty to the dance developed. In the end, a winner was chosen, but the motivation was not a prize, it was to have a space where young people could have fun, share and train virtually, so the prizes awarded were donations.

This is usually the step by step events carried out by this young man, who through his events, workshops and dance classes provides a place, either face to face or virtual where young people can have a healthy life, because the most important thing is to be able to do things and not create excuses.

Its target group is very broad, as it is interested in reaching those people who are interested in dance, have good energy and are committed to participate in the events, workshops or classes that take place.

If you want to, you can!

This young man believes that obstacles will always exist, however, if you have an idea, you should carry it out and not look for excuses not to do it, because if the idea really excites you, there will always be ways to turn it into a reality with effort.

Therefore, rather than looking for or focusing on obstacles, you should always think about making your ideas a reality and not about the lack of money or time.

It’s not about numbers, we are people

Although there is no exact number, it can be seen that Fred’s actions have had more than a dozen participants, because for the young man the important thing is not to count but to know that each of the participants did it because they wanted to dance, have fun, share and entertain themselves, so whether it is 100 or 1, the important thing is that the space was created and the message was transmitted.

For Fred the pandemic has not helped in general, so with or without the pandemic the initiative would have developed, given that since he started dancing he has developed events. However, what the pandemic did was to change the focus or the theme, because these activities have been developed to help and entertain people, to be able to cope with COVID-19 in the best way.

Meet the creator of this initiative

This initiative was born from Frederick, who individually but with the help of colleagues has managed to create the initiative, Fred studied to become an actor, he is also a dancer and currently teaches dance classes. His studies and career have allowed him to promote and share healthier activities.
Link: https://www.instagram.com/sweethomebattle/?hl=es 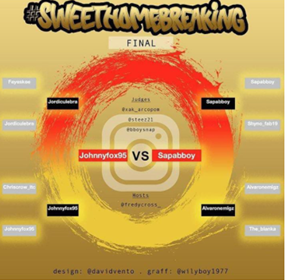