What is this initiative about?

The “MINTIs” initiative is designed to give the visitors of the Vilkaviskis Open Youth centre the opportunity to take part in active physical activities, which require not only the will but also the opportunities, i.e. the equipment.

The aim of the project is to strengthen the physical and psychological health of young people – the visitors of the centre were given the opportunity to spend time actively cycling, to strengthen their bodies in their free time, to get to know their native land, to interact more with new people, to be proactive and creative, and to develop self-confidence.

The project funding has enabled the purchase of 16 bicycles, which means that 15 young people and 1 staff member can go on a ride.

“MINTIs” was born during participation in an international Geographic event, which was a night march. “MINTIs” was born with the group of young people who took part in the event, as some of them reached the center with bicycles and others came on foot. So together they expressed the idea that it would be fun if everyone could have bicycles. This led to the need for bicycles for the Vilkaviškis Open youth centre, which would be available for those who do not have and cannot buy one.

During the pandemic in 2020, we held an online event to find out the most visited place in the Vilkaviškis district (although there are not many of them in the district itself, and there was not much to see in the city on foot), and discovered that it was the woods, as the quarantine restrictions in the city meant that there was not much to walk around. However, forests are too far fot people to walk there.

They also said that they were cooped up at home and wanted to move around, but they couldn’t walk very far, which would be interesting.

Therefore, the project was written to support cycling and it was stated that 6 cycling rides are planned for 2021.

Not everyone has the opportunity to travel, so the Vilkaviškis Open youth centre wanted to provide opportunities to get to know the local district and to promote the idea that it is not necessary to go everywhere by car (although the center has a minibus that could take young people), but that it is possible to be more active and sustainable, so the project was intended to encourage movement.

What is the target group, and how are they reached?

The Vilkaviškis Open youth centre is for 14-29-year-olds, but 13 years old schoolchildren are sometimes welcome too. Students or working young people come quite rarely, therefore 65-90% of visitors are schoolchildren under 18 and some from different places of the Vilkaviškis district.

A specialist from the Open Youth Center invites teachers with their pupils to get to know the organisation, to play, interact in educational activities, and to take advantage of the opportunities provided in the centre.

Vilkaviškis Open youth centre is mostly visited by young people with fewer opportunities, who have more free time and do not attend any non-formal activities after school. So the centre offers all kinds of activities instead – a space to interact, to play, create, play sports, participate in events and just hang out with friends. Information about activities and possibilities in the centre is shared on “Facebook” and “Instagram”.

Young people discover the Open youth centre because of the convenient location of the premises – there is a cultural centre across the street, a bus station and their premises are linked to the Vilkaviškis Children and Youth Centre (the same building) which is full of non-formal activities.

The Open youth centre is visited by those who come after school to wait for buses or extra-curriculum activities. Youngsters can just come in without planning to participate in some activities, sit down, play, go to the music class (with musical instruments) to play. It helps because they see the centre and know they can come.

How did the pandemic affect the organisation?

Initially, the Vilkaviškis Open youth centre had to suspend its interactive meetings, but in Spring 2021 it was possible to come in smaller groups of 5 at the agreed time, so young people were very willing to sign up and come, and there were even queues for a month in advance to see which group would come. The young people were very keen to meet and spend time together, as there was lack of live interaction.

The pandemic delayed the start of the project, losing several summer months that would have provided ample opportunity for cycling. And in autumn, young people start school and attend non-formal activities, which makes it more difficult to coordinate the timing of the rides, and it gets dark earlier, so it is necessary to get back earlier, which limits the distance of the bike rides.

A few things – the pandemic, young people’s financial capacity and knowing one’s homeland. During the quarantine, many young people stayed indoors, got bored, and became less motivated, so the bike ride was a great opportunity to re-engage young people and get them active. And the fact that some of the centre’s visitors do not have, and may not be able to buy bicycles and go on organisational or town rides together, increases the exclusion of young people with fewer opportunities. In addition, it has become clear that many of them do not know Vilkaviškis and its surroundings well, so the initiative has become useful not only from a social and physical point of view, but also from an educational point of view!

There was one march where all the participants signed up without any aquaintancies! This surprised the centre staff, as young people are usually shy to go somewhere on their own, without friends, among strangers.

Rasa herself said “how fun that you are so brave to go on a hike without friends”. One girl said “there’s nothing to do anyway”, another young man explained that such meetings were meant for getting to know new people, and another teenager ho as quite shy in the beginning but eventually became brave enough to ask about the possibility to participate in the next trip. Those who had not been on a hike were surprised to find out about picnics we hold, interactive games that we play during our stops, so they really enjoyed it.

In general, new friendships were made during the hikes, and some of the participants found out about the Vilkaviškis open youth centre for the first time and started to constantly visit it. On each of the hikes, when going to well-known places in the Vilkaviškis district, there were some yougsters who had never been in certain places before, even though the furthest point was 11 km away from Vilkaviškis. There were some young people who travelled such distances (22 km) in one go for the first time, which means that the project is really contributing to improving the physical activity of young people. The cycling unexpectedly increased the visibility of the Vilkaviškis centre, as more young people found out about the centre and its other activities, as well as the number of new visitors. There is a real positive impact of the project, with positive feedback and questions like “when will we be able to ride again?” – which means the ride was really good, enjoyable and worth going to.

Continuity of the initiative

Although the project came to an end, the equipment purchased during the project is an investment for the future: in community gathering, in learning about the land, or in improving young people’s psychological and physical health.

Cycling is not only about going to far away places. Young people can pick bikes up at any time of the day when the centre is open, by signing an agreement that they are responsible for the items they pick up, thus guaranteeing the safety of the equipment and allowing young people to be more active in their leisure time, independently of the activities organised.

Specialist of the center have also spoken to town schools’ physical education teachers to use the bikes during school hours if they agree in advance.

Teachers of non-formal educational groups in the the neighbouring organisation – Vilkaviškis Children and Youth Centre are also encouraged to use of the bicycles and e. g. explore nature in the outskirts of the town. Hopefully, they will come up with the idea of going somewhere too.

We asked a representative of the initiative:

How can young people help each other during the COVID-19 pandemic?

“Live communication is the key. It’s important for everyone to be heard, so the most important thing is to give each other the ultimate gift – attention. To be close. Set an example by initiating live communication rather that use the phone.”

Some come just to hang out, others are looking for the staff to suggest things for them to do. The activities can always be different and young people themselves express their needs or simply come up with something themselves.

There is also a variety of outdoor fitness equipment at the centre where young people can exercise and stay fit.

Vilkaviškis Open youth centre was established in 2016. It came about as a result of a need for places where young people could gather and not be obliged to engage in any particular informal activity.

The premises of the Vilkaviškis Open youth centre are large enough, there is a possibility to watch films, play table football, pool, table tennis or board games, cook in the kitchen. What is the most important, all the activities are free. 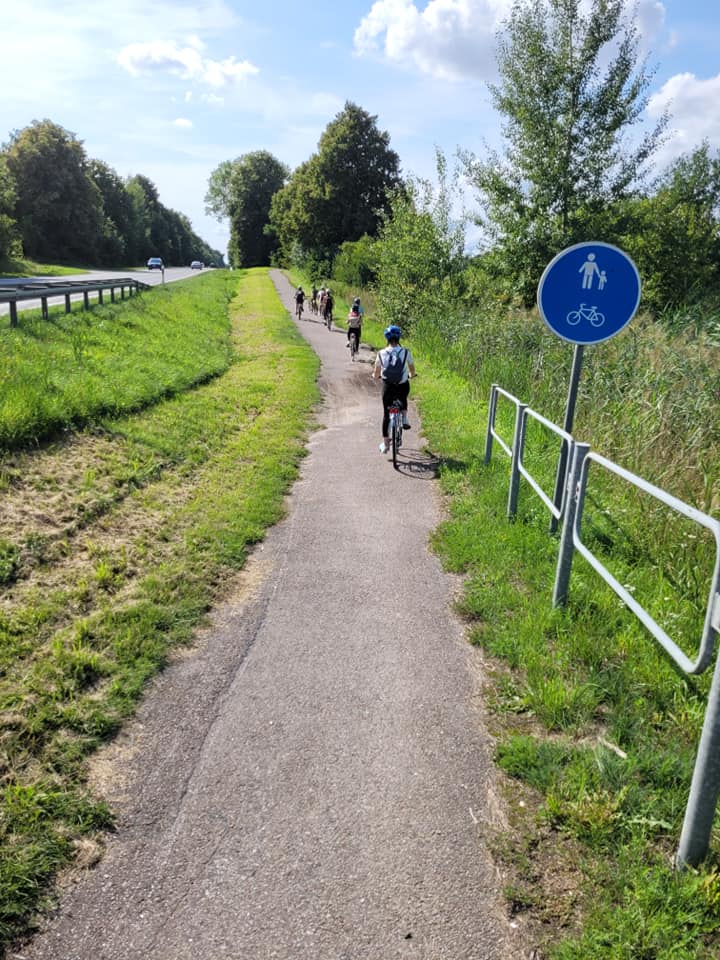