Engaging youth to protect the oceans

What is All For Blue?

All For Blue is a Greek non-profit organisation with global actions, founded in 2017 by Katerina Topouzoglou, with the mission to protect the seas and oceans through education and experiential cleanup actions. The organisation aims to directly reduce ocean pollution by actively removing litter from the ocean and beaches, to help raise awareness about the seas and why a healthy marine ecosystem is vital for all of us, and to encourage ocean-friendly sustainable lifestyle choices among youth.

All For Blue in action

Within five years of its establishment, All For Blue has managed to collect and remove over 300 tons of waste, cleaning kilometers of beaches and seabed in various areas of Greece, creating recycling bins from the destroyed plastics that bins collect during cleaning (upcycling), while offering educational programs to protect the marine ecosystem. Through its ocean conservation seminars, All For Blue aims to inform future generations about the balance of the marine ecosystem, to provide ways to avoid single-use plastics, and to tell the truth about what is really happening in the oceans. At the same time, the organisation wants to show to the participants how to organise a cleanup, act as a team and raise awareness. Since 2017, more than 57,000 children and young people have attended All For Blue’s seminars and received diplomas.

All For Blue’ actions are based on the belief that through teamwork and cooperation people can do more. At the same time, education is at the forefront of the organisation’s activities. Their aim is through the ocean conservation seminars to raise awareness and motivate the local youth in every place they visit to act for the environment and make the difference.

“It is our philosophy that through education, collaborations and dedication we can help to spread awareness, and motivate and empower communities everywhere we go to act for the environment and make the difference”

Katerina Topouzoglou is the founder and soul of All For Blue, the person who got the team together. From an early age, the sea was an integral part of her life. Initially as a young athlete and later on as a freediving and scuba diving instructor and a volunteer of ocean protection actions, she has spent countless of hours at the sea. The idea for All For Blue was born as she kept noticing every single year that the ocean trash was increasing, while fish were decreasing.

She founded All for Blue as she thought that it would be a good idea to visit schools in order to share her passion and knowledge of the sea with children and young people.

Katerina Kylertzi, Administrative Officer at All For Blue, highlights that marine pollution has dramatically increased over the last decades. “We can see that there is no beach and no part of the planet that has no plastics and no microplastics anymore,” she notes, pointing out to a survey by the MacArthur Foundation and the World Economic Forum, which has concluded that if we do not take drastic measures, by 2048 there will be more plastics than fish in the sea. “The volume of plastic produced over the past 10 years is larger than the plastic that had been made since its production started back in the 1950s,” Kylertzi says.

Topouzoglou and her team truly believe that All For Blue is a valuable opportunity to offer something important to the next generation; to do something beyond themselves, something that triggers a positive change. “We think that it is a great benefit even if we manage to increase the awareness of even one child,” she says.

In October 2018, All For Blue started the #KeepAegeanBlue; the biggest mission of underwater, beach cleanups and educational programs about ocean conservation ever taken place in Greece. The organisation, in cooperation with the South Aegean Region and with the participation of thousands of volunteers, visited 23 islands and educated almost 18,000 students. During the mission, 32 tons of trash, amongst them 2 motorbikes, a couch, a Christmas tree, washing machines, and numerous plastics were removed! The #KeepAegeanBlue mission was embraced by young people, who created afterwards their own cleanup teams, and set the ground for the organisation’s future activities.

In September 2021, All For Blue took on a symbolic environmental mission to clear the beaches and seabed of the holy island of Delos – a UNESCO World Heritage site. A team of 70 volunteers of the organisation, together with the volunteer team of Mykonos, consisting of high school students, and in collaboration with the pharmaceutical companies InterMed and Uni-pharma, visited Delos and performed coastal and underwater cleaning.

“It was a mission that signaled the actions of the whole year, mainly due to the location but also due to the volume of waste collected on this island – from both the beaches and the rocks at the port of Delos and from the seabed,” Kylertzi explains.

More than a tone of waste was removed from the seabed of Delos. Hats, plastic bags, sunglasses, fishing gear, chairs, signs, bottles, tires, irons and masks were some of the items that the group of free divers took from the bottom of the island.

“It is touching that the response from everyone was so great and substantial. The result of the cleanup and the amount of waste we collected was really impressive,” Topouzoglou adds.

Waste increased during the pandemic…

Apart from the common plastic waste that All For Blue team collects from the beaches and seabed, during the last two years, because of the Covid-19 pandemic, they constantly remove masks, gloves, and other pandemic waste. “Of course, Delos was no exception, because among the wonderful things we, divers saw on the seabed, we also removed too many masks, gloves and antiseptic wipes, which clearly should not be there,” Topouzoglou says.

…but so did volunteers!

One positive thing though that came out of the pandemic was that the All For Blue volunteer base grew really big during these last two years. The fact that people spent more hours online gave the organisation the opportunity to reach more youngsters through social media, broadcast its activities on these channels and become known to the wider public.

At the same time, they managed to increase their volunteer base, by creating an online form on their website, in which every interested person can fill in their contact information, and receive updates from All For Blue about their actions and the training seminars, so that they can participate.

Waste increased during the pandemic…

Topouzoglou and Kylertzi believe that youth have the power but also the desire – and this is really encouraging – to bring a real change in the world. Indeed, it is impressive that after almost every seminar All For Blue delivers, there are young people who decide to create teams and continue the cleanups on their own.

“We believe that the new generation is the one that should show the rest of the generations – both to those who will come and those who have preceded – that man can take his fate into his hands and correct the damage that he has already done,” Katerina Kylertzi says.

“Unfortunately, our generation received from their ancestors a drug-filled ecosystem and we are giving the new generation a planet full of plastics. We must apologize to these children for what is happening and tell them that the sea is currently in need of allies and we want them all with us, so we can reverse all that is happening right now,” Katerina Topouzoglou adds.

They agree that what motivates and gives them strength to continue their work is the impressive desire of young people to learn and help clean up the mess!

You can find more info about All For Blue at https://allforblue.org/. 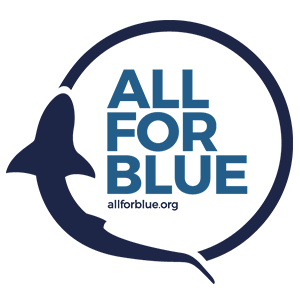